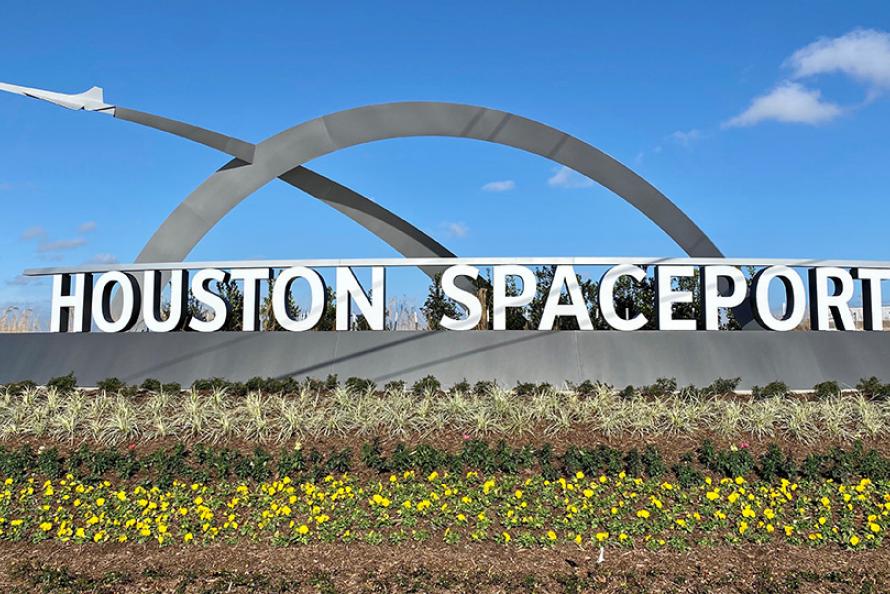 Houston Spaceport recently unveiled its new monument sign, which took four months to complete and is highly fitting to denote the spaceport as a center for collaboration and innovation.

“We are very pleased to have completed the monument sign,” Ellington Airport and Houston Spaceport General Manager Arturo Machuca said. “Tenants, visitors and staff have all been so complimentary of the ‘Space Age’ design and look, and it is a great harbinger of many good things to come.”

Houston Spaceport is the nation’s 10th licensed commercial spaceport and continues to develop and grow exponentially.

As a center for collaboration and innovation, Houston Spaceport is unique among the other federally licensed spaceports. It lies in Houston, the country’s fourth-largest city and a major hub for aerospace and aviation activities. Literally, no other commercial spaceport is located in a city larger than Houston.

The Spaceport was most recently in the news with the announcement that it would soon house the world's first commercial space station builder, Axion Space. Beginning in 2021, Axiom Space will be constructing its 14-acre headquarters at the Spaceport.

Machuca said that long-term plans for the spaceport include a passenger terminal to support air and space operations.

Partnering with NASA and key universities has also been integral to Houston Spaceport’s long-term vision of commercial aerospace leadership.

One of Houston Spaceport's tenants includes Intuitive Machines, a private company that secured a NASA contract to build the NOVA-C Spacecraft, a nearly 13-foot lunar lander that will deliver cargo to the moon in 2021. San Jacinto College has also invested in building its Edge Center, the official education partner for Houston Spaceport that offers aerospace training and career pathways for students.

Machuca extended an open invitation for aerospace companies to visit and check out the campus.

“We’re so excited about the future of the Houston Spaceport,” Machuca said. “The monument,” he said lightheartedly, is a great sign of many good things to come!”