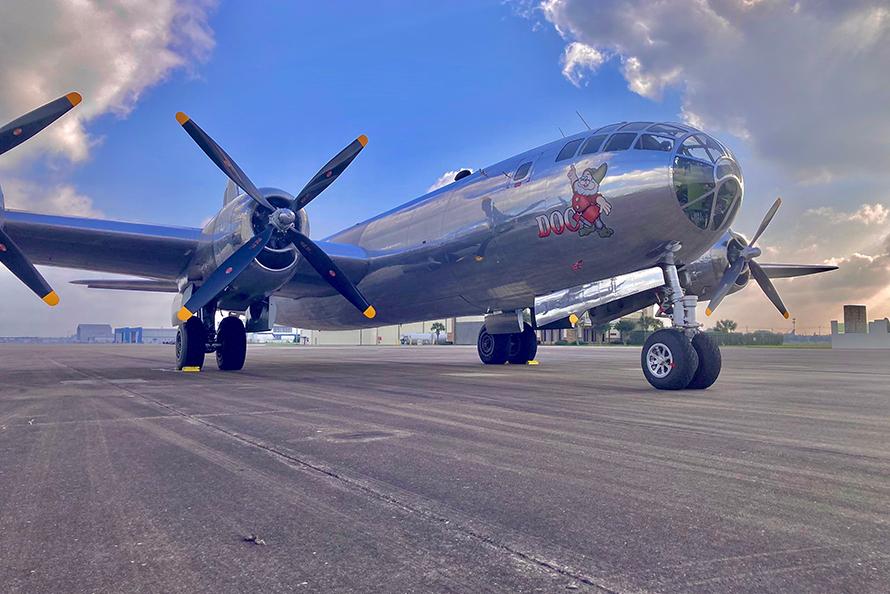 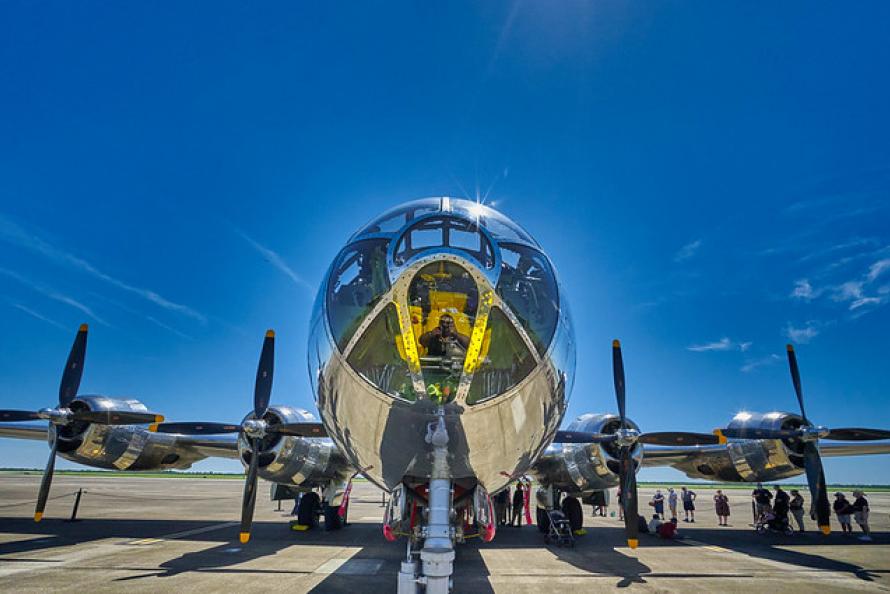 Affectionately nicknamed “Doc,” the B-29 Superfortress spent May 3-9 at the Lone Star Flight Museum at Ellington Airport and was available for rides, ground and flight deck tours as a part of the History Restored Tour.

Thousands of visitors and attendees were thrilled at the opportunity to see the historic warbird, one of 1,644 manufactured in Wichita, Kansas, during World War II. Doc was found abandoned in the Mojave Desert in 1987.

The effort to restore a damaged and rotting Doc to flying status took more than 450,000 volunteer hours and over two decades. Skilled workers and retirees from Wichita’s aviation industry, veterans, active-duty military members and others spent tens of thousands of hours on Doc’s restoration. Many individuals and organizations made financial and in-kind contributions to keep the project going over the years.

Today, it serves as a flying museum. Doc is one of only two B-29s in the world still airworthy and flying today.

Wells said they were excited to bring Doc to Houston and partner with the museum “to give people an up-close and unique experience with one of the historic bombers that delivered victory and protected freedom during World War II.”

Unparalleled Capabilities for its Time

The B-29 Superfortress was the most capable bomber of World War II, able to carry more payload and fly faster and higher altitudes than contemporaries such as the Boeing B-17, Consolidated B-24 and Avro Lancaster. Two modified B-29s dropped atomic bombs on Hiroshima and Nagasaki, Japan, in August 1945, helping to end the war in the Pacific.

The mission of Doc today is to honor the men and women who sacrificed for the freedom of others, including those who designed, built, maintained and flew the B-29 during and after World War II. Doc connects people with the rich heritage of the B-29 and allows aviation enthusiasts to experience the thrill of a B-29 up close. The rare warbird also educates today’s generation and future generations on the contributions of the Greatest Generation during wartime.

“We are proud to join in their efforts to honor, educate and connect people with the history of World War II and the sacrifices made by those who served,” Owens said.

Its appearance at the Lone Star Flight Museum was the aircraft's only visit to Texas and wrapped up the current tour that included well-received stops in Arkansas, Louisiana and Alabama.

“We recognize the amazing work that went into its restoration and were thrilled that our local community had the opportunity to come out and enjoy an iconic memorial first-hand.”