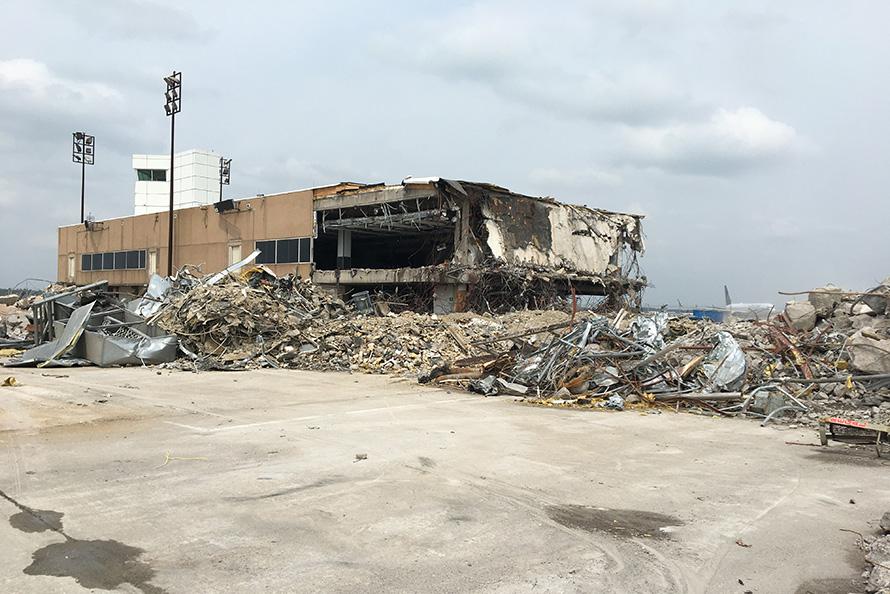 The demolition of the old Terminal C-North building, completed in the summer of 2020, was yet another milestone in the project

Despite the COVID-19 pandemic, the IAH Terminal Redevelopment Program, ITRP, continues to move forward with considerable progress. Houston Aviation Director Mario Diaz has characterized the groundbreaking modernization program to be “of essential importance for the City of Houston” to remain a top-tier international gateway.

Additional international facilities are needed to support continued growth in international traffic at the airport. More than 45 million travelers passed through George Bush Intercontinental Airport in 2019, including over 11 million international passengers. The pandemic clearly slowed what promised to be a record-breaking 2020 but air travel is slowly on the rebound and HAS continues to prepare itself for the eventual return to 2019 levels, albeit a “new normal.”

Chubb said that the airport system is well-equipped to manage through the pandemic, thanks to wise stewardship, years of financial planning, and help from additional funding sources such as a $200 million grant courtesy the CARES Act. The CARES Act is the Coronavirus Aid, Relief and Economic Security Act, a $2.2 trillion economic stimulus bill signed into law in March 2020.

Although some airport projects and programs have been paused, Chubb said that ITRP is on solid financial footing.

“In light of its importance, ITRP has certainly been prioritized,” he said.

“This was a major consideration in the Series 2020 A-C refunding which priced in September 2020, saving Houston Airports millions in debt service in 2021 and 2022 and making additional commercial paper available to fund the project.”

After a record-breaking 2019, Houston Airports continues to absorb significant losses resulting from the pandemic. Travel restrictions and a slump in demand among travelers have led Houston Airports, and literally every airport around the world, to suffer such losses.

With more than 44 million confirmed COVID-19 cases worldwide, it is unclear when air travel will return to normal.  At many airports, construction projects have been delayed or canceled as a result of the financial impact of COVID-19.

At IAH, Chubb noted the following as proof of the steep financial decline:

Chubb outlined a number of actions that Houston Airports took to offset the financial drag of the pandemic and allow programs like ITRP to continue unabated.

“We updated our financial projections and these new projections provide a reasonable basis for planning operations and maintenance and capital spending levels as we operate during this pandemic,” Chubb continued.

From the start, Houston Airports mustered a robust response to COVID-19. Operationally, the airport system created a COVID-19 webpage to keep the public updated on new safety initiatives. Houston Airports implemented FlySafe Houston to convey to passengers the overarching commitment to ensuring their safety and health as they arrive, depart and connect through IAH and William P. Hobby (HOU) airports.

The International Air Transport Association anticipates the global airline industry will lose more than $84 billion in 2020.

Earlier this year, IATA Director General and CEO Alexandre de Juniac, said “Financially, 2020 will go down as the worst year in the history of aviation.”

Houston Airports has about $2 billion of outstanding subordinate lien debt. The system has no senior-lien debt and Houston Airports bonds carry ratings of A1 from Moody’s Investors Service and A from S&P Global Ratings.

“The stable outlook reflects the strong liquidity available to withstand a recovery that is slower than the system's expectations and Moody's expectation that enplanements will recover enough over the next 24-26 months to maintain historic financial metrics,” Moody’s analyst Earl Heffintrayer said in a recent story in The Bond Buyer magazine.

Houston Airports 950 days of cash on hand would cover more than 24 months of operating expense and post-refunding debt service with no revenue, according to Moody’s. The airport system will use $96 million of its $200 million CARES act proceeds to pay debt service in fiscal year 2021, which is considered in Moody's calculations of liquidity and demonstrates active management to mitigate cost increases to airlines, according to Heffintrayer.

“We do not see any material immediate credit risks for Houston Airports,” Heffintrayer said. “However, the situation surrounding coronavirus is rapidly evolving and the longer-term impact will depend on both the severity and duration of the crisis.”

Houston Airports senior management projects a return to 2019 enplanement levels by 2024. In the meantime, ITRP continues to move forward.