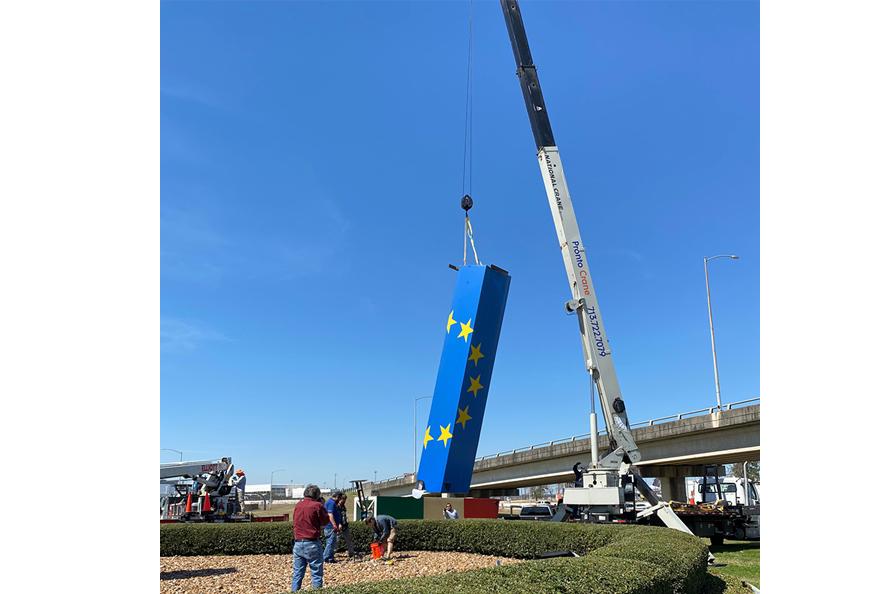 Light Spikes was originally created in 1990

Houston Airports is proud to be the home of one of the largest art collections in Texas. With nearly 300 pieces on exhibition in and around George Bush Intercontinental and William P. Hobby airports, conservation keeps Houston Airports Curator of Public Art Alton Dulaney very busy.

“Something that is often overlooked is the care and maintenance that goes into preserving these art pieces for passengers and community members to enjoy for generations to come,” Dulaney said. “The program is not only about acquiring and displaying these works, but also conservation, especially for outdoor art pieces which are exposed to the sun, rain and wind all year-round.”

The piece was originally created as a temporary exhibition to promote the 1990 Economic Summit of Industrial Nations and was first installed in front of the George R. Brown Convention Center. The abstract flags represent the European Economic Community as well as the seven countries that participated in the Summit. The installation consists of eight flags that are individually wrapped around illuminated square columns that rise out of the ground. The countries represented are the United States, Great Britain, France, Japan, Canada, Germany, Italy, and the European Union.

The piece was so beloved by the community that it was relocated near the Bush Airport control tower after the summit ended. Over the last three decades, the piece has undergone several overhauls to reinforce and transform it from a temporary exhibit to a permanent exhibit. The last such conservation effort was over 10 years ago.

This year, work has already started on a major conservation effort to replace the vinyl-wrap flags and update the lighting. The first mobilization has taken place in which two of the spikes were removed from their bases and trucked away to a workshop for much- needed repairs. The plan is to remove the spikes, two at a time, conduct the repairs and conservation, return and reinstall them, and then take the next two spikes.

Overall, the project will take about six months.